Today we will experience a lot of Rome. 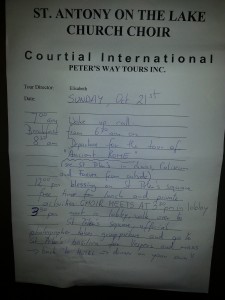 We start the day with our “usual breakfast” but today we don’t have to have our suitcases packed and ready to load on the bus. We did some laundry last night, and hung it out on our balcony to dry overnight. Good thing we don’t need to wear it this morning because it was very damp outside last night! The weather forecast is for a sunny day with a light breeze…they’ll be ready when we get back.

Our first stop is the Basilica of St. Peter in Chains. its not a very impressive building on the outside. But looks can be deceiving! My first clue should probably have been the artwork on the ceiling of the “porch” outside the front door…simple yet very elegant.

I was just reminded that several members of our group went to the Vatican to witness the Cannonization of seven Blesseds so these photos may be new news to some of them. 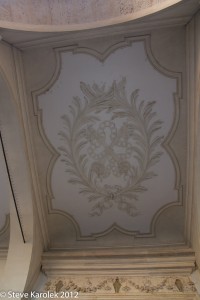 Stepping inside, it got fancier fast 🙂 This beautiful fresco in the center of the ceiling above the nave depicts the Miracle of the Chains 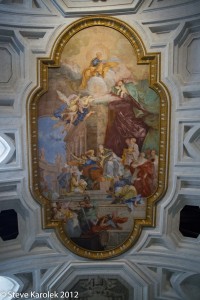 The left side of the basilica, walking from the entrance toward the sanctuary, had several side altars which had been converted to tombs over the years. There seemed to be a preoccupation with reminders (the grim reaper, skeletons) of the temporary nature of our human state. 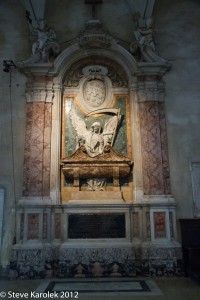 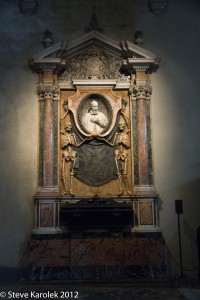 They all had, either on the face of the altar, or on the floor below, an engraved explanation of who was buried there, why they were important, etc. I’m sure it is all perfectly understandable if you know Italian and Latin: 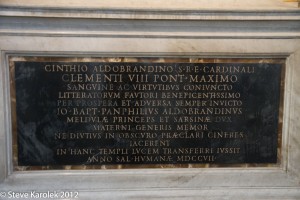 St. Peter in Chains is a “minor basilica” (there’s an explanation on Wikipedia) and also a “titular church”. These are churches in Rome which are assigned to one of the current Cardinal Priests as their home church in Rome. It sounds like in many cases, the assignment is in name only and the Cardinal may or may not bother to visit when in Rome. The current Cardinal Priest of St. Peter in Chains is His Eminence Donald William Wuerl, Cardinal of Washington DC.

The basilica is primarily famous for two things, the first being the relics said to be the chains used to hold St. Peter captive in Jerusalem. While it has been proven that these cannot possibly be those actual chains, they still make a good picture in their reliquary under the main altar: 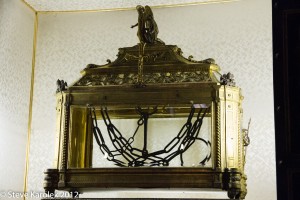 The second, and probably more famous, feature is Michelangelo’s statue of Moses, which is part of the tomb of Pope Julius II. This tomb was my first introduction to the concept of “pay as you go lighting”. Put a euro in the slot and the tomb is lit for a few minutes. Take your photos now! 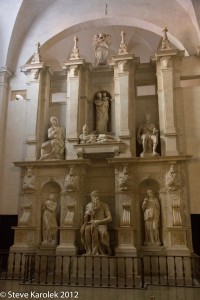 Moses is quite impressive 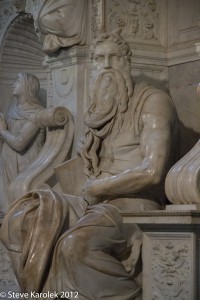 The ceiling above the sanctuary is a beautiful collection of frescoes 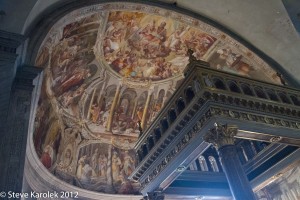 Looking back from the altar, another view of the Miracle of the Chains 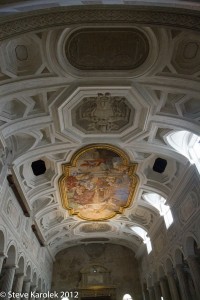 With significant frescoes, I was surprised that we were allowed to take photos, even flash photos for those who thought the little flash on their camera would make a difference in this huge space, and light votive candles. 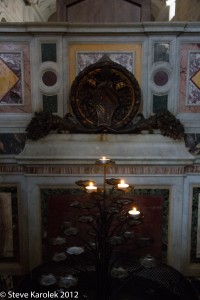 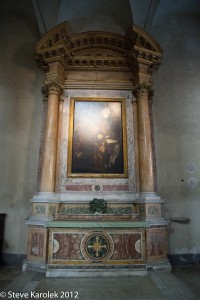 After praying for our friends and relatives, it was time to move on. Adjacent to the basilica was an engineering college. I’m not sure if the locked gates are to keep students in or out… 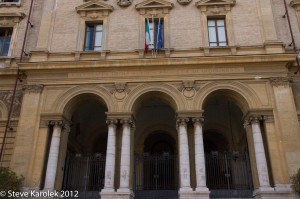 Our tour guide Elisabeth took this opportunity to explain that it would be quite a while until the next restroom break, and the owners of the sidewalk cafe were quite willing to let us use theirs for free, especially if a few of us were to purchase something from them. 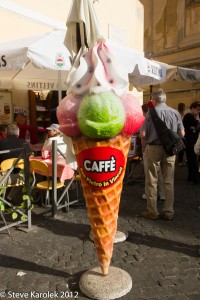 I noticed that not many of our pilgrims were capable of passing up gelato. So of course some of us used the restrooms and most of us bought a yummy treat!

This seems like a good time to take a break from the blog as well. I’ve decided to post this segment separately for a few reasons, including:

So, until the next segment, when we meet Ancient Rome, Arrivederci!