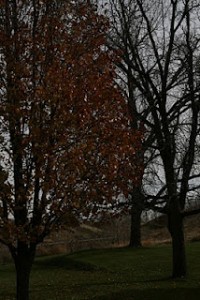 Every neighborhood has one…

Well, first some perspective on my neighborhood. My niece and nephews think I live “out in the boonies”. It doesn’t seem remote at all compared to some of the places I’ve visited. Yet it is a world away from city life as many know it. Each weekday morning I drop my son off at school by 7am and head to work. I could easily hop on the Interstate, first US16 then I94 for the ten mile trip to my office. Most mornings, however, I choose the rural roads. I find the slower pace and the great scenery – I drive through two small towns, past Pewaukee lake beach, fields, woods and wetlands, and the road undulates over and around the terminal remnants of the last glacier to pass through – to be a great way to get to work in a relaxed mood. Its not that I dislike commuting on the interstate with a few thousand of my closest commuting friends, its just that I like the scenic drive more.

So, the commute is part of my neighborhood. And, the pace of the commute gives me plenty of time to notice things in the neighborhood. Like the tree. Every neighborhood has a tree that hangs on to its leaves, in splendid color, long past when all the other trees have let go. Sometimes, I wonder if it is the same tree each year. Unfortunately I’m getting to the point where things like that don’t really stick in my memory. Other times I wonder why. Haven’t all of the trees been exposed to the same wind, rain, cold and shorter days? What makes that one hold on so tight? Is the tree hanging on to the leaves or are the leaves clinging to the tree?

I recently had the opportunity to change roles at work, and with the new role came a new office. Being energy conservation minded, I was careful to sort and toss things that didn’t need to move before moving them to avoid handling them multiple times – pack, move, unpack. I have to admit I was amazed at the number of things; reports, files, CDs, conference binders, etc. that I had no desire to move. Why then, had I hung on to them in my old office? Surely they weren’t clinging to me.

As we look at the neighborhoods of our lives, most of us can probably find some things that we’re hanging on to. Maybe it is a box in the basement that has never been unpacked following the move from our last house 11 years ago. Maybe it is those record albums that I might get transferred to CDs someday. Maybe its an eating habit that isn’t as healthy as it should be. Maybe its a recreational or entertainment activity that wastes precious time which could be spent in more positive ways. Perhaps you’re battling an addictive behavior, or stuck in an abusive relationship. Sometimes letting go is hard, even when we know its the right thing to do.

Is now the time to stop hanging on?